After three consecutive academic years during which Israel has intensified its efforts to force international lecturers to leave the country, Birzeit University, Al-Haq, and Adalah – The Legal Center for Arab Minority Rights in Israel, are demanding an immediate halt to this policy targeting Palestinian academic freedom and isolating Palestinian institutions of higher learning. Birzeit University – despite operating under Israeli military occupation – must be guaranteed the ability to exercise its right to freedom of education.

Please stand with us in protecting the Palestinian people’s right to education. The past year has seen an intensification of Israel’s long-standing policy of undermining Palestinian education at all levels. Just last week, Israeli occupation bulldozers demolished mobile classrooms in Al-Tawani neighborhood in the southeast of Yatta in the Israeli-occupied West Bank. Meanwhile, in Khan al-Ahmar, a small Palestinian community east of Jerusalem, dozens of schoolchildren welcomed the new school year a month and a half before it officially starts, in an attempt to stop the impending demolition, not just of the village’s sole school, but of the entire village. After the High Court of Justice issued an injunction against the demolition last week, the state asked the court to exclude the school from its ruling, so it could demolish it and prevent the school year from starting early.[1]

A less visible but no less devastating part of this policy involves Israeli-imposed entry and residency restrictions on international academics, which have severely diminished opportunities for development of faculty, courses, and research programs at Palestinian institutes of higher education. On 8th June 2018, seven international faculty members at Birzeit University (BZU) — one-third of the international staff at the university — were refused visa extensions by the Israeli authorities; several others have already been obliged to leave the country.

While international academics seeking to enter or work in the occupied Palestinian territory (oPt) have long faced obstacles, the situation has dramatically declined over the past year. Since 2017, foreign nationals wishing to maintain a presence in the oPt, whether for reasons of work or family unity, have faced an alarming escalation in the rejection of visa extension requests and in the frequency and range of arbitrary demands and conditions imposed by the Israeli authorities. (See for example: https://www.aljazeera.com/news/2018/07/foreign-residents-palestinian-territories-denied-visa-renewals-180713112441505.html ). Palestinian educational institutions have been hard hit by Israeli denials or restrictions on entry and presence in the oPt, as evidenced by the recent survey of Palestinian universities undertaken by the Palestinian MOEHE. Of the eight universities responding, over half of all foreign national faculty and staff have been negatively affected over the past two academic years causing serious disruption to the academic programs and administration of these institutions. Moreover, it has undermined Palestinian universities’ ability to attract further external expertise as foreign academics are deterred from accepting teaching and research posts by the arbitrary rejections and destructive restrictions imposed by the Israeli authorities. Schools have also been hard hit. (See for example: https://www.haaretz.com/middle-east-news/palestinians/.premium.MAGAZINE-israel-s-ultimatum-to-a-revered-palestinian-principal-and-change-agent-1.6137066?=&ts=_1531586701562 ).

Act now to help us protect the right to education and basic academic freedom for Palestinians.

For more information, please see documents below or contact RightToEnter@gmail.com.

LETTER: California Scholars for Academic Freedom: “Letter to Israeli President Netanyahu re Professor Widad Barghouti’s Administrative Detention Without Cause or Recourse to Due Process.” September 2019.

LETTER: Scholars at Risk Network: “Concerns About Restrictions on Scholars’ Ability to Travel to the West Bank.” September 2019.

MEDIA: Mondoweiss: “Palestinian universities fight back against Israel forcing international academics out of the country.” July 2019. 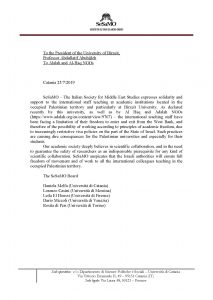 MEDIA: Inside Higher Ed: “No Passage to Palestinian Universities.” July 2019.

STATEMENT: “USACBI condemns Israeli violations of Palestinian academic freedom.” (US Campaign for the Academic and Cultural Boycott of Israel, August 2018)

The impact of Israel’s denials & restrictions on entry & presence of foreign nationals to the occupied Palestinian territory: Results of query to Palestinian higher education institutions (Right to Enter Campaign, April 2018)

Israel refuses to allow a lawyer to leave Gaza to reach her studies in democracy and human rights in the West Bank – Gisha. July 1, 2010

US citizens: Send this letter to Congressional reps

Join Birzeit U call to action